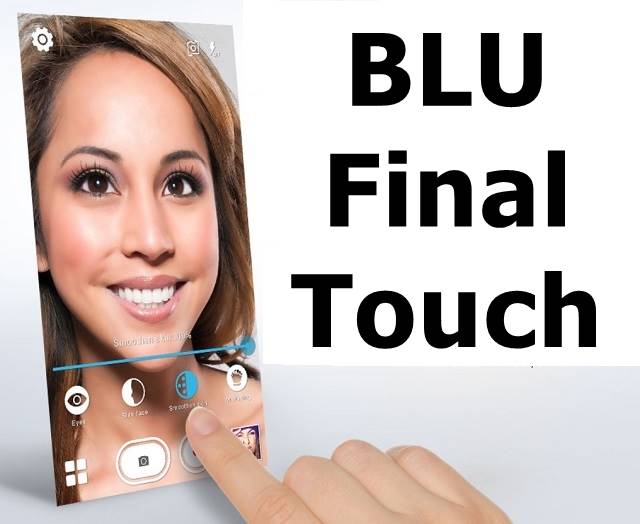 To enhance the selfie camera pictures, BLU Products has introduced the Final Touch feature. Check out BLU final Touch software features and how to use it.

Everyone wants perfect pictures from their mobile phone camera. Getting professional photos can be easy now as BLU Products has come up with some unique features to enhance the camera photos that you take.

BLU final Touch software auto assists you to apply various settings to the photos that you take on your mobile phone camera to make it professional alike photo.

BLU Products has equipped software in each camera that helps in removing blemishes and thinning of the face from the camera pics that you take. It also enhances the light in every picture.

So we have now explained what's BLU Final touch software and now let's go through some features that you can apply.

This BLU camera feature has got this four functions -

Use the glider provided while editing the photos to increase or decrease each of the above mentioned functions.

So be it Bold N1 or BLU G9 Pro, you will get the end result as perfect professional camera like photos with these editings.

So that's BLU final Touch software found on the all BLU phones manufactured after 2018.

Share
Facebook
Twitter
Pinterest
WhatsApp
Previous articleLife Wireless Customer Service Number, Email Support
Next articleBLU Bold N1 Price in US, Specifications, Pros & Cons, Overview
Yogesh Khetanihttps://yogeshkhetani.com/
Yogesh is been in the field of technology for over 12 years now. He keeps him updated with the latest smartphones in the market. He also loves outdoor games and so as a part of his hobby, he keeps you updated with Sports updates apart from Technology news. Subscribe to my YouTube Channel at https://goo.gl/Ocvdz9
RELATED ARTICLES
General

How to Fix QLink Wireless Hotspot Not Working